Been There, Done That and Now For Something New

May 12th this year will makes 11 years since we bought the Hunter Passage 42 that we call Wahoo. A few of you might remember we had a 40ft Wahoo that we bought in 2006 with the idea we could evacuate on a sailboat should another Katrina come along. As I’ve said before we were all self-medicating back then. Anyway, back on the 11 year thought...so 11 years of sailing and 8 years of living the cruising life. We left New Orleans in March of 2012 and Wahoo has not returned. The last blog detailed that first 10 years. So what now? We seem to have settled into the North Western Caribbean, though we still dream of going back East. Grenada and that string of islands is a big draw, some of the friends we made are still there. But there are wonderful friends here also. The Bay Islands of Honduras are calling and we hope to get over there in the next week. We’ll spend the balance of this cruising season among those islands.

But after that, what??

Nothing wrong with what’s been happening.
Well, with one exception.

We arrived back at Tortugal Marina where Wahoo was resting, on December 14th. Immediately we had her hauled out for a bottom paint job which was overdue as the last one had been in Puerto Rico in 2017. Unfortunately we discovered blisters. This is what happens when water gets trapped behind the barrier coat. This is your protective barrier between the gelcoat of the fiberglass and the anti-fouling paint which repels barnacles and whatever else wants to live on the bottom of your boat. Big blisters can jeopardize the integrity of your hull but these were tiny blisters and not that many of them. Research and the boat yard said there was no problem with sanding and applying a temporary bottom paint. We could deal with the underlying issue when we returned to the Rio in June. Great!

Enough cruisers were back to make our Christmas holidays festive including good friends on Alta Mae, Cordelia,  Kooky Dance, Jump and Fandango. So we had a Tortugal Christmas and then left for Belize and spent New Year’s, complete with fireworks, out on one of our favorite cayes.

It didn’t take long before we were reminded that it’s still winter and your US cold fronts do reach us. they shift the winds to North bringing cloudy skies, high wind and cooler temperatures then we’re prepared for. We hustled down to Placencia and a safer harbor than the cayes provide. Living aboard in Placencia includes Yoli’s (on da Wata) which is a great cruiser bar, plus restaurants and delicious street food everywhere you look. Fun evenings at Yoli's or aboard often include getting to listen to Dave from SV Cordelia, our sailing troubadour.

We had New Orleans people, Tiffany and Kevin Eyers, come for a visit. They brought gifts for Wahoo and King Cake for us, definitely the kind of folks you want to come back! Luckily the weather cooperated enough to let us take them out to a few cayes. We followed that with a couple of days traveling inland so they got a taste of Belize.


We are now preparing for a departure to West End, Roatan in the Bay Islands of Honduras. Looks like we’ll leave Placencia around 11am tomorrow, Sunday Feb 23. We’ll sail beyond the reef around 5pm going through Ranguana Pass then it’s 90NM due East. Weather looks favorable which is super important. Notice that Due East track, remember we are in Trade Wind territory and those winds generally blow East to West. To avoid heading right into them we’ve waited for an abating cold front with NE winds that are very light, hopefully under 10kts. Seas should also fall with waves under 3 feet with a 6 second interval making them longer than they are tall. That’s the forecast but you sail with the weather you get not the forecast. So here’s hoping for an easy ride!

Sitting here, trying to focus on standouts-both great and terrifying.

The absolute standout anchorage was a night off of Cuba at Cayo Campo where we had an incredible day meeting the men who cared for the monkeys, the anchorage itself was spectacular. Right on a reef, feeling like we were anchored at the edge of the earth. We were surrounded by incredible shades of blues and turquoise. But that night when the full moon rose so big and bright the water was so clear that it seemed to disappear. For the first time, I thanked Roy for taking me (often kicking, cursing and screaming) on this incredible journey. Though to be honest Mt Hartman Bay in Grenada is a standout for so many reasons. Certainly my most favorite hurricane season.

Terrifying was the overnight passage between Cuba and Jamaica. Supposed to be a walk in the park but a weather window shut mid-Passage and the winds climbed to 40+knots with seas approaching 15ft. That truly wasn't so bad but the freighter that seemed intent on running into us is the real story. Roy had to turn from our course in those high waves several times as he attempted to keep us safe. While there were others, to me, the worst was in the Dominican Republic when we came out of the slit that protects Isla Beata, to near white-out conditions. Certainly learned to trust in Wahoo that day. 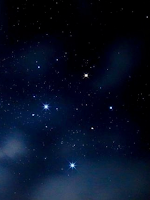 Which certainly brings me to the most magical passage. On the same trip East, we were sailing overnight across the Windward Passage, between Jamaica and Hispaniola, on our way to Ile a Vache and I saw the Southern Cross for the first time and like the song says “ realized why I came this way”.

And the most magical experience? Well, cruising in the Grenadines on our way to Bequia when we were overwhelmed by the sight of hundreds of dolphins cavorting in a line on either side of Wahoo as far as the eye could see. No picture can do that experience justice.

We are proud to be a part of the support given by the cruising community to the countries we visit. From bottles of rum to the caretakers of cayes in Belize, to the school supplies, hooks and fishing line in Cuba to being part of “Friends of Ile a Vache” and "Pass It on Guatemala". Wherever we sail - Grenada, through Dominica to Guatemala we are grateful to be part of this community that shows respect and love to the places we visit.


Last but not least I treasure the incredible people we have met and shared time with, both cruising friends and island locals. Impossible to name them all but Mike and Roycelyn stand out for singing “Happy Birthday” to Roy over the VHF in Portsmouth, Dominica so that the entire harbor of 40 odd boats heard them, to Dave and Jane Mitchell who shared so many stellar moments on our trip down the Eastern Caribbean Islands and then returned so that we could share Classic Race Week in Antigua, to our Grenada Gang of Eight who made hurricane season in 2015 a highlight of my life.

2010 The BP oil spill meant we didn’t go far, but we had fun with friends


2011 NOLA to the Bahamas, Stops on the Gulf Coast in Key West and the Dry Tortugas. 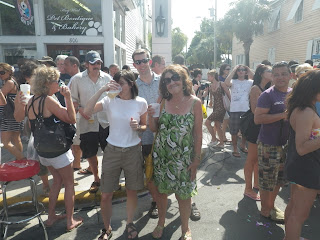 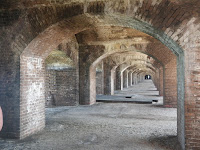 As did Dave & Angela. We visited Duval Street and Fort Jefferson in the Dry Tortugas 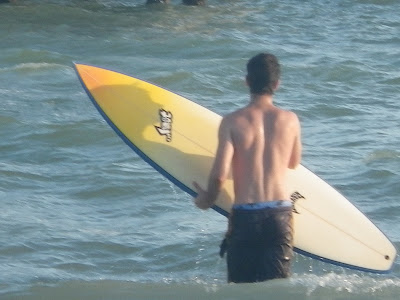 2012 On April 11 Wahoo left New Orleans for the Caribbean.

after all of that and Mexico too, we eventually headed to Belize 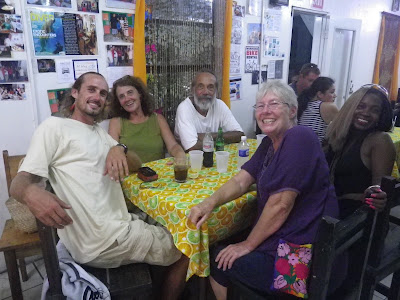 With Sebastian, and don't know who else, we ended in San Pedro in time for dinner. 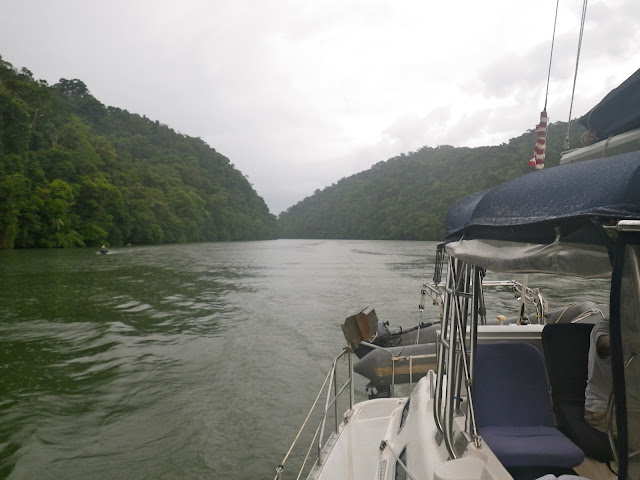 2013
More exploration of the Belizean cayes with a June sail to Isla Mujeres for hurricane season before heading back to Houston and New Orleans.

2014 Back for Christmas and winter sailing in Belize. Then we head to the Eastern Caribbean with a 6 week trip through Cuba plus Jamaica, Haiti, Dominican Rebuplic and Puerto Rico before loads of fun in the Virgins. 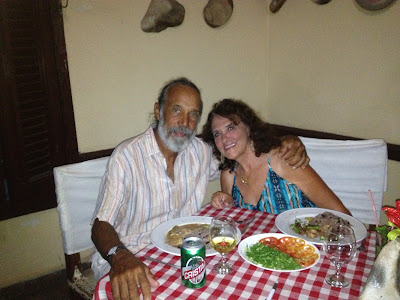 We arrived in Cuba from Mexico and celebrated Roy's 70th Birthday in Nuevo Gerona, Cuba
where the streets are made of marble.

And then it was on to Jamaica

Our trip across the Greater Antilles brought us straight into the Trade Winds. They blow West we were going East but it was worth it to finally get to Puerto Rico and the Virgins where we had such great company 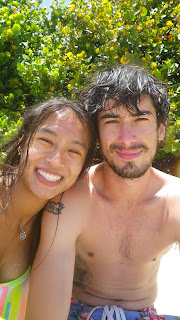 October 2014 We returned and sailed to St Martin, St Bart's and Anguilla 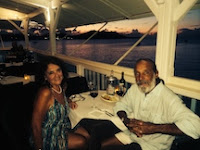 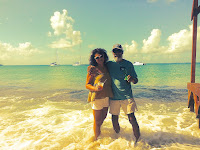 Then our dear, dear friends came for Ted's 70th birthday.

2015 We continued down the Island Chain of the Eastern Caribbean

In Grenada for 2015 hurricane season - 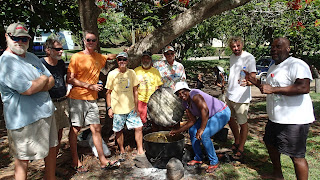 had an Oildown on the beach 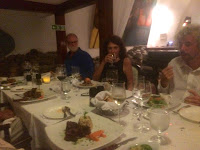 2016
Grenada to Puerto Rico included a stop in Antigua for Classic Race Week and a chance to meet up with friends once more.

Back up the chain of islands we went, with a return visit to each island again. 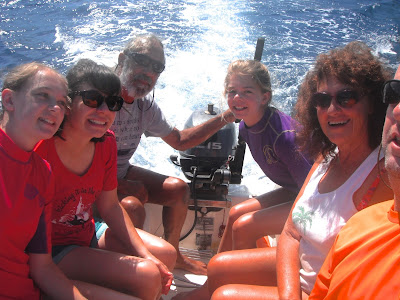 2017
The trip West back through Cuba, Mexico and finally Belize 3 years later

But come May 2017 we entered the worst of times.
With Austin's death we were left bereft, without a rudder or even an anchor.  We were grateful for these two 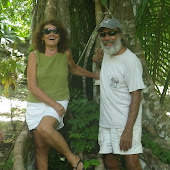 Find the boat - that's where we are.